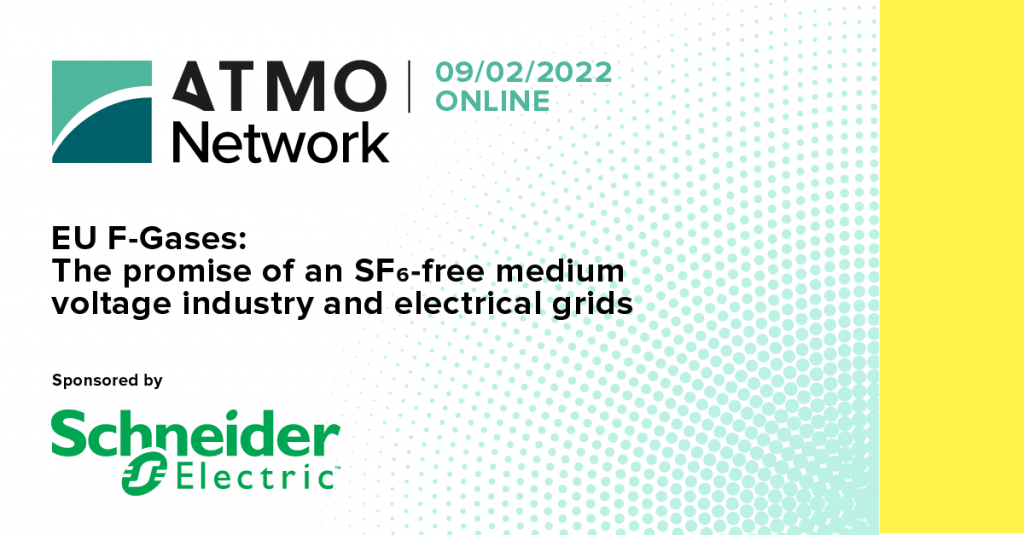 Brussels, Belgium (10 February, 2022) – The ATMOsphere Network Event ‘EU F Gas: the promise of an SF6-free medium voltage industry and electrical grid’, held online on 9 February, convened high-level keynoters from the policy sector, as well as industry representatives and academia stakeholders to discuss climate-neutrality solutions for the European electricity grid. The event targeted policymakers at the European level and gathered attendees from multiple EU members states’ governmental offices and international non-profit organisations (NGOs). The event was part of the ATMOsphere event series, which includes also ATMOsphere Europe and ATMOsphere America amongst others.

The discussion kicked off with Marc Chasserot, CEO of shecco and Founder of ATMOsphere, explaining the background of the event. Sulphur hexafluoride, or SF6, is a fluorinated substance known as one of the most potent greenhouse gases with a global warming potential (GWP) of 22,800 over 100 years, according to the Fourth Assessment Report adopted by the Intergovernmental Panel on Climate Change (IPCC). The substance has been extensively used in electricity networks due to its properties.

Chasserot highlighted the success of the current EU F-Gas Regulation for the commercial refrigeration sector, which is largely thanks to clear policy signals. ‘With the climate law we have the obligation to do more rather than less, sooner rather than later’, said Chasserot, which also applies to SF6. He concluded his presentation by noting that much still needs to be done, especially regarding fluorinated substances other than hydrofluorocarbons (HFCs). SF6, in fact, has not been dealt with in the current version of the regulation; neither the phase-down nor bans apply to its use.

Bas Eickhout, a Dutch Member of the European Parliament in the Greens/European Free Alliance, joined the conversation, supporting a more ambitious revision of the EU F-Gas Regulation. He described 2014 negotiations in the context of the current regulation and noted that the market has moved on since then with the sector more ready to take this step. ‘We have to make the upcoming revision expected in April much better’, said Eickhout. ‘We have to introduce phase outs in sectors where we can go faster, and SF6 is one of the issueswe should pay attention to.’ Asked by an attendee about his opinion on measures to tackle SF6,Eickhout replied that ‘a direct ban is probably the most straightforward option, and would have my initial preference. I am open to combination, but definitely there must be a phase out.’

Bertrand Deprez, Vice-President in charge of EU Government Affairs at Schneider Electric, followed and presented the technology of air-based MV switchgear to attending policymakers seeking solutions to decarbonise the electricity grids. Deprez noted that R&D has required around 10 years of effort, but the solution is now ready. ‘The situation has completely changed’, he noted. ‘All the players are ready, and the market can shift to SF6-free solutions in the next few years’, he underlined. ‘Strong political signals about SF6-free solutions are needed to implement decarbonized power systems as those solutions now start to be commercially available’; he continued ‘according to the Fraunhofer study, we need new MV switchgear installations to use only SF6-free equipment by 2025 should we want to achieve grid carbon neutrality goals’.

Wolfram Heckmann, Applied Research Project Manager at the Fraunhofer Institute, presented the results of his team’s research on ‘Modelling scenarios of MV switchgear installation development and impact on SF6emissions’. He raised the issue of already installed equipment and explained that emissions mainly occur during end-of-life management, network grid extensions and operation. ‘Strict monitoring is needed for end-of-life management, as there is great uncertainty regarding handling quality’, he said. This is needed to ensure low rate of leakage. ‘Industry needs to start using SF6-free switchgear as soon as possible’, he concluded.

Marie-Charlotte Guetlein, Assistant Professor at Grenoble School of Management keynoted the final part of the event, presenting the results of the work undertaken in her team’s study ‘Empirical study investigating the environmental and socio-economic impact of SF6 and its alternatives in medium voltage switchgear’. Guetlein reported that over 400 respondents submitted their views to the survey, and the results clearly show that a decline in the use of SF6 in this sector is expected. The survey also indicated that industry stakeholders are willing to pay a premium for low-climate-impact switchgear. ‘Policy and regulations have been identified as the main drivers of this transition’, she concluded, ‘and regulation has been effective in pushing alternative technologies.’